We just returned from a school break adventure in California.  We took a road trip from San Francisco to Palm Springs. A few of our trip highlights included a stay at the Wig Wam Motel on Route 66 and a day trip to the Joshua Tree National Park and Pioneertown - an old west filming set.
We also explored the spots where Laura and Almanzo's daughter Rose Wilder lived during Rose's time in San Francisco.

Rose moved to San Francisco in 1908 (age 22) and the city opened up opportunities for her writing career.    Rose also married Gilette Lane in San Francisco, but the relationship ended in 1915.

I have posted before about William Anderson's, Little House Guidebook (which is an excellent book if you are planning a LHP tour), but if you want to learn more about Rose, Trini L. Wenninger's Rose Wilder's Lane's San Francisco is an excellent source.  The guidebook is just 50 pages and a quick read identifying those spots in San Francisco that have a connection to Rose. 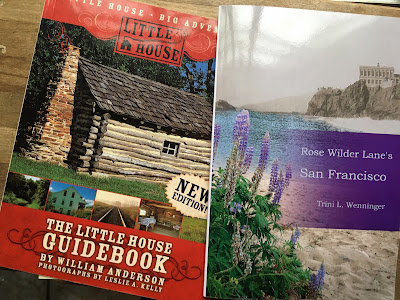 By foot, we were able to see Rose's first apartment at 1418 Leavenworth.  In order to reach these spots, you will have to climb lots of hills so it is important to wear suitable shoes.
In 1915, Rose was able to finance a trip for Laura to visit the city.  At this time, Rose was living at 1019B Vallejo Street in the Russian Hill district. This building - built in 1892  - is called the "Williams-Polk house" after its architect.  The building is built on a hill that was once thought inhabitable because the property lot changes in elevation some 40+ feet.  It is a privately owned home so we were not able to investigate its full architectural significance, but able to admire it from the street.
Down the street from the Vallejo property is Rose's Taylor Street Apartment.  Rose and her best friend lived in this shingled building before Rose moved to Sausalito.
According to the guidebook, Rose considered herself an adopted San Franciscan and in her letters wrote, "there has never been a place that I love just as I love San Francisco."